Hi there! Soon the new episodes of The Walking Dead will be upon us! And so - clearly- I needed some nails Zombie me would be proud of. Truthfully, I tracked down and purchased this plate JUST for the brain stamp. It was hard to find. I paid too much. I have problems. This is my first attempt at a manicure with it! This is also my first time using the kleancolor polishes I picked up from amazon...Which I will Probably review at some point- after I've worked through a few more colors. And now.... ON WITH THE NAILS! 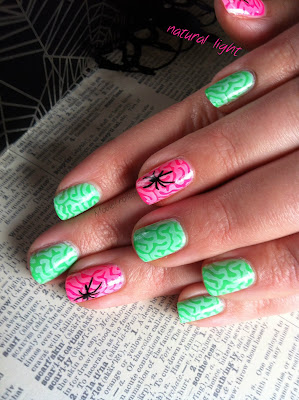 For this mani I started with everything here! And the Cheeky Jumbo stamping plate D.(obvie) 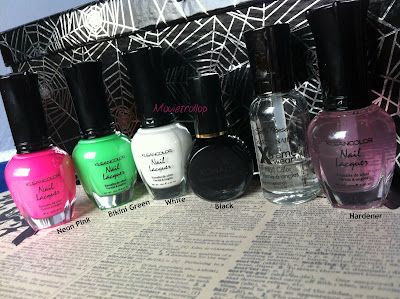 
Then I painted one coat of Neon Pink on my ring finger and thumb (because I felt like having two accent nails today) followed by one coat of Bikini Green on the rest of teh digits. It doesn't have to be perfect because the stamping is so large but if you have any super uneven spots- even them out. As you can see I followed up painting the nails with a nice smash into the table, smudging one- which I didn't fix and they still turned out just fine. 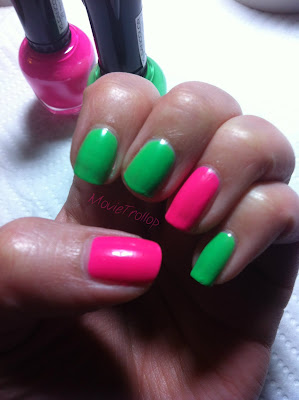 Got my stamping things ready.... 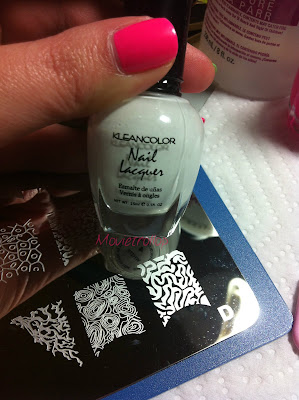 On to the Stamping! So I decided to try a new polish (Kleancolor's white) with a new stamping plate.... a brave choice... or a dumb one. To start I picked my thumb...again, an iffy choice because it's a big nail. Still I stamped and ... like I would have guessed had it been anyone else doing it- only half the stamp worked. So I double stamped it...and got this. It's okay, we can fix it later. 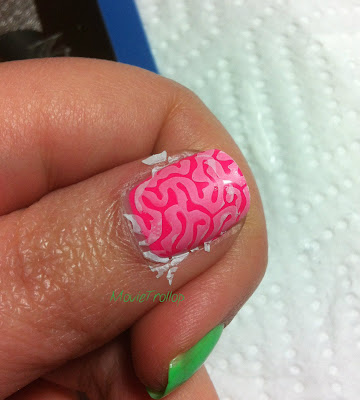 It also looks completely gross and didn't stick to the entire nail. Not awesome. But completely fine after throwing on a layer of Hardener (which I only used because the nail was already wonky so if it made it worse I'd just re-do it.)

I did this on all ten nails with the same stamp and the same polish. I added a spider stamped using the Konad black polish and a spider I found on a random nameless ebay stamping plate I have, to the Neon Pink Accent nails. There are a lot of plates that have spiders, use whatever you can find/have already. This covered up... well, distracted from all the messed up bits. I tried a few clear coats to seal them on and settled on Sally Hensen Xtreme nails as the best top coat. No smearing and it's nice and shiny.


POOF! Zombie me is happy with these fantastic brain nails! Neon Neon Neon. 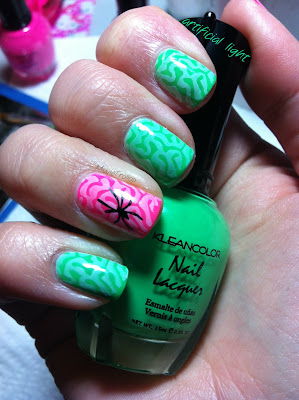 So there you have it! Hope you like it and forgive me for being so completely MIA. If you have any questions- leave them!
Thanks for looking!
-Robin
Posted by Movie Trollop at 4:13 PM